Sri Lanka is one of the most famous Islands of the world, having maintained it fame down the centuries. Once called ‘a tear drop on the Indian Ocean’, this beautiful island has been a mentioned in the ancient writings of Europe, Arabia and India. The island was a developed civilization as far back as the third century BC and was trading food grains, elephants and iron with the Greeks, Chinese and Arabs. Sri Lanka finds mention in the edicts of the Magadha King Ashoka and according to ancient texts, he sent his son Mahendra and daughter Sanghamitra to the island to spread the teachings of Buddha.

After decades of sectarian conflict and a devastating civil war,  peace has finally returned to the country and as a result it has started attracting tourists in large numbers.

Tourism in Sri Lanka takes two routes, the first is a journey to the glorious past of Sri Lanka, to the ancient cities of Kandy, Anuradhapura and Pollonaruva. The triad of these cities combined with the Dambulla caves and the Sigirya Rock is known as the Cultural Triangle of Sri Lanka, the stories of which we have narrated in our travelogues. However, it is the nature’s trail to the Hill Country of the  island which we will discuss in this post.

Colombo, the capital city, is the major point of entry into Sri Lanka. The International Flights arrive at the Bandaranayake International Airport and the city is connected to the major destinations of the world by airlines like Qatar Airways, Thai Airways, Mihin Lanka, Jet Airways etc. Kandy, the first destination in the Cultural Triangle is about 120 KM from Colombo and can be reached either by road or by rail. It is from Kandy that the Hill Country can be reached.

Nuwara Eliya, Sri Lanka’s higest town and a favorite hill station of the British, lies at the heart of the Southern Hill country. The town has earned the title of Little England owing to an 18 hold golf course, a race course, the Victorian park and fishing retreats at the lakes and streams. It is common for the mercury to drop to the freezing point and smoking chimneys of the Tudor styled houses add to the Colonial charm of the town. Nuwara Eliya serves as the base from where the expedition to the thick forests and Mount Pidurutalagala can be launched. 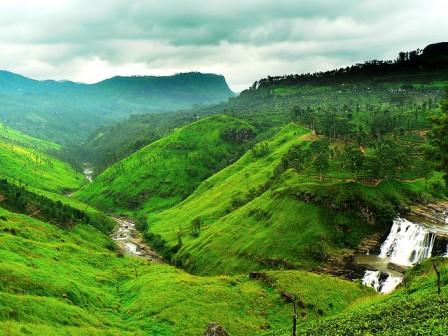 Among the most iconic imagery of the  Hill Country are the tea estates that are swept over vast terrains of land like a green carpet. Women draped in colorful sarees and carrying a basket on their backs can be seen deftly plucking the tea leaves. Some of the finest tea produced in the world comes from these hills and a visit to a tea factory is highly recommended. Many of the tea factories still use the methods and machinery from the Victorian times.

The Horton Plains are a desolate, windswept plateau to the South of Nuwara Eliya. This plain offers excellent trekking opportunities including a 9 km walk to the ‘End of the World’ where a cliff plunges dramatically for around 1000 m, giving a spectacular view of the country side. The plains are rich in wild life and herds of deer, lizards and many exotic varieties of birds have made this place their home. If lucky, one can also get a visit from a leopard. 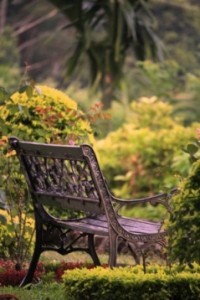 To the east of the Horton plains, lie some of the most beautiful villages of Sri Lanka. The whole country side is dotted with small hills and  spectacular waterfalls and is a heaven for adventure seekers. Perched on the top of a hill and surrounded by tea estates and pine forests is the quaint little village of Ella which, with its pretty bungalows and front yard gardens, offers some of the most beautiful views of Sri Lanka. Ella is also related to Ramayana, it was at this place that Ravana is said to have hidden Sita after abducting her. Nearby are the ancient Ravana temple, the Ravana Ella cave and the Ravana Ella waterfalls, all shrouded in the legends from the past.

While coming back, if one is not in hurry then taking the hill country train will be a great idea. Snaking through tea plantations, pine forests and hills, its a great way to experience the romance of one of the most beautiful train journeys in the world.

Kithugala is a scenic village lying to the west of the hill country. The dramatic landscape of this region is replete with forest clad cliffs plummeting down to the wild and frothy waters of the Kelani river. This place is among the best sites in the country for white water rafting. Kithugala happens to be the site for the 1957 legendary film, The Bridge on River Kwai.

Ratnapura, located to the south west of the hill country is a rich source of gems, for which Sri Lanka has been famous since the days of King Solomon. A trip to a gem mine, where most of the work is still carried out by hand, is an experience to be cherished. One can also visit Sinharaja Forest Reserve, a UNESCO World Heritage Site and the last refuge of virgin rain forests on the island. Damp, mysterious and teeming with life, it is a must visit for those who are fed up with concrete jungles.

Rising above the hills to the southwest of the hill country is the Adam’s Peak, also known as Sri Pada. This peak is considered sacred to the followers of all the religions of Sri Lanka and attracts thousands of pilgrims every year. The ascent is a grueling 4800 steps night hike and is rewarded by a spectacular view of the sun rising and casting a perfectly triangular shadow on the clouds below, a queer phenomenon special to this place.