“What a bold, mad act of genius it was, to make ‘Lawrence of Arabia’, or even think that it could be made!” This was what Robert Ebert had to say when he sat about to critique Lawrence of Arabia. I cannot write a review of this film for that will be blasphemous; I can only try to introduce this magnificent portrait in celluloid to the uninitiated.

Lawrence of Arabia, the 1962 magnum opus directed by David Lean is based on the life of T.E. Lawrence, a British Army officer famous for his extraordinary role in the Arab revolt of 1916 against the Ottoman Empire. The film starts with the death of Lawrence in a motorcycle accident in 1935. As the funeral service at the St. Paul’s Cathedral is on, there is a brief dialogue among the Vicar, Col Brighton, a Reporter and Allenby.

BRIGHTON: He was the most extraordinary man I ever knew.

VICAR: Did you know him well?

BRIGHTON: I knew him.

VICAR: Well, ‘nil nais ibonam’, but did he really deserve a place in here?

REPORTER: Lord Allenby, could you give me a few words about Colonel Lawrence?

ALLENBY: What, more words? The revolt in the desert played a decisive part in the Middle-Eastern Campaign.

REPORTER: Yes, sir. But about Colonel Lawrence himself?

ALLENBY: No, I didn’t know him well, you know.

REPORTER: Eh, Mr Bentley. You must know as much about Colonel Lawrence as anybody does.

BENTLEY: Yes. It was my privilege to know him, and to make him known to the world. He was a  poet, a scholar, and a mighty warrior.

BENTLEY: He was also the most shameless exhibitionist since Barnum and Bailey.

This is how the director introduces the protagonist to the audience – T.E. Lawrence, played by Peeter O’ Toole; a Lieutenant in the British Army posted in Cairo, who is more famous for his weird nature and knowledge of the Arab culture than his military acumen and is often deemed a misfit in the army.

Lawrence is sent on an assignment to assess the prospects of the Arab prince Faisal who seems to be fighting a hopeless war against the mighty Ottomans. On his way, his Bedouin guide is killed by Sherif Ali (a remarkable Omar Sharif) for drinking water from a well without permission. This is Lawrence’s first brush with the undercurrents in the Arab tribes and the internal strife which tears them apart. Later at one point, he would tell Sherif Ali:

“So long as the Arabs fight tribe against tribe, so long will they be a little people, a silly people, greedy, barbarous, and cruel, as you are.”

Once at the Prince’s camp, Lawrence does more than the simple assessment he was supposed to do, while ignoring the advice of his superior Brighton to complete his task and go back. With his rich knowledge of the Arabs and high spirits, he wins the admiration of Faisal. While Brighton advices the Arabs to fall back after a crippling onslaught by the Turks, Lawrence proposes a audacious idea to go on an offensive and capture the port of Aquaba which will provide them with access to the British supplies. He manages to convince Faisal to give him 50 men led by a skeptic Sherif Ali.  Together this motley group crosses the Nefud Desert, believed to be impassable till then. At one point, Lawrence risks his life to go back alone to save the life of Gasim, a companion who has fallen from his camel due to fatigue, earning the respect of Sherif Ali in turn.

The Arabs sally forth

The crossing of Nefud by this army surprises everyone. He manages to bring Auda abu Tayi, the leader of the powerful Howeitat tribe into an alliance. This alliance is almost broken when a feud happens between the men of the two camps and one of Auda’s men is killed one of Sherif’s. To end the strife, Lawrence announces that he himself will shoot the culprit to avoid the blood for blood policy of Arab’s getting any nastier. Ironically, this man is none other than Gasim himself whose life was saved by Lawrence sometime back. Next day, the allied army overruns the defenses of Aquaba in a surprise attack and captures the port in the first major jolt to the Ottomans.

From Aquaba, Lawrence marches towards Cairo accompanied only by two teenager brothers Doud and Faiyaaz who have been his favorite companions since the starting of this adventure. However, Doud dies a tragic death getting sucked by a quicksand and only Lawrence and Faiyaz reach Cairo to tell the story of their astounding victory to General Allenby.

Lawrence is made famous by an American journalist Jackson Bentley who gives his heroics a wide-spread coverage. He is sent back to the deserts to start a guerrilla war against the Ottomans and makes multiple raids on the Turkish troops and supply lines. During one such raid, Faiyaz is badly injured and instead of leaving him to be tortured by the Turks, Lawrence has to shoot him. At one instance, he is arrested by the Turks during a spy mission in the city of Daara where he is stripped and badly assaulted. Back, he recruits an army of himself and wrecks havoc on the Turks and starts getting venerated as a Prophet by the Arabs.

As the war progresses, Lawrence becomes a changed man. From someone who detested violence to the core, he has started relishing killing. At one instance, he tells the General that he actually enjoyed killing Gasim. His army conducts a massive massacre of the Turks in which he participates with glee. The change within himself keeps tormenting him but he eggs on towards the final goal – Damascus.

Under the command of Lawrence, the Arabs capture Damascus before the British arrive. However the Arabs are ill-suited to run an urban establishment and soon become a pawn in the British hands. Realizing the British design, of which he was always suspicious of but could never find, a dejected Lawrence is now of no use to both Faisal and the British and leaves the city. 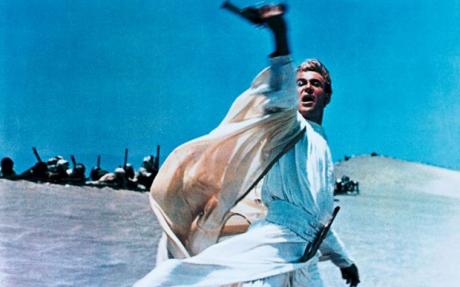 The Prophet in a white robe

Even though the film is about war, it is not entirely about just the war. The film delves in human emotions to a surprising depth. In the words of Professor A.W. Lawrence,“The film is a psychological recipe. Take an ounce of narcissism, a pound of exhibitionism, a pint of sadism, a gallon of blood-lust and a sprinkle of other aberrations and stir well.” The protagonist, T.E. Lawrence is an enigmatic character, impossible to pin down as to even his fundamental alliances and motivations. He comes like a charm, barefoot and in white robes and in his lean, almost fragile frame, is larger than life than many superheroes of our times. For an egotist who once called himself, “more a legion, than a man”, this man looks surprisingly vulnerable. His reputation clings to him like an albatross around the mariner’s neck and he  keeps agonizing and thriving in it in turns. The crystal clear blue eyes of Lawrence seem almost ladylike, but you would cringe in disgust by the way they gleam when he is busy enjoying killing.

Like the desert in which this film is set, it  has a huge canvas captured in a fashion deemed miraculous by the likes of Speilberg. Few films have ever provided nearly as much insight into both human nature, as well as a complex, pivotal moment in history that has had far-reaching consequences. The Cinematography alone is enough to give this film a place in history.  The viewer is overwhelmed by spectacular outdoors, astounding hues and shades of desert never captured by the lens before. I would never forget the scene where Lawrence and his guide stand besides a well, looking at Sherif Ali approaching them on his horse amidst vast expanses of surreal nothingness. This lone scene should bring down any photographer  worth his salt on his knees, with tears of joy in eyes. It is here that Freddie Young, the cinematographer, proves that he was a wizard of frames even with his 60s equipment.

There are two kinds of cinegoers, the first type are the lovers of entertainment, those seeking an escape from their mundane day to day life into the fantasies of movies. And there are some others for whom cinema is a form of art, a collage of sensitivities and the harbinger of reality not easily seen but always subtly present. For such people, Lawrence of Arabia is a study into the art of cinema, an experience to cherish. If you seek entertainment, then unfortunately you may not survive the 222 minutes of this film. However, if you belong to the second type, let me tell you that this film is one of the best you will ever see. Take the plunge.