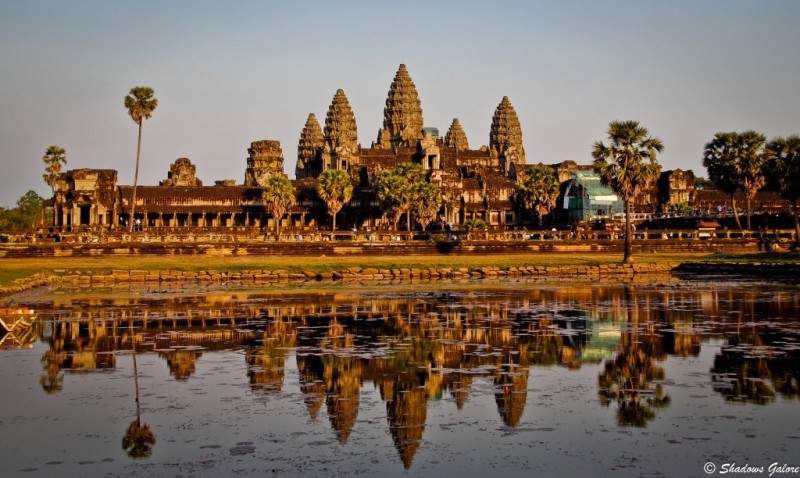 “(Angkor Wat) is of such extraordinary construction that it is not possible to describe it with a pen, particularly since it is like no other building in the world. It has towers and decoration and all the refinements which the human genius can conceive of.”

After a wonderful experience at Ta Prohm, it was time to finish the day with the monument for which we all were here, Angkor Wat. It was around 3:00 PM and even in January, Cambodia was hot as hell. Our driver told us that it will take us at least two hours after which he would take us to the various evening delights of Siem Reap. 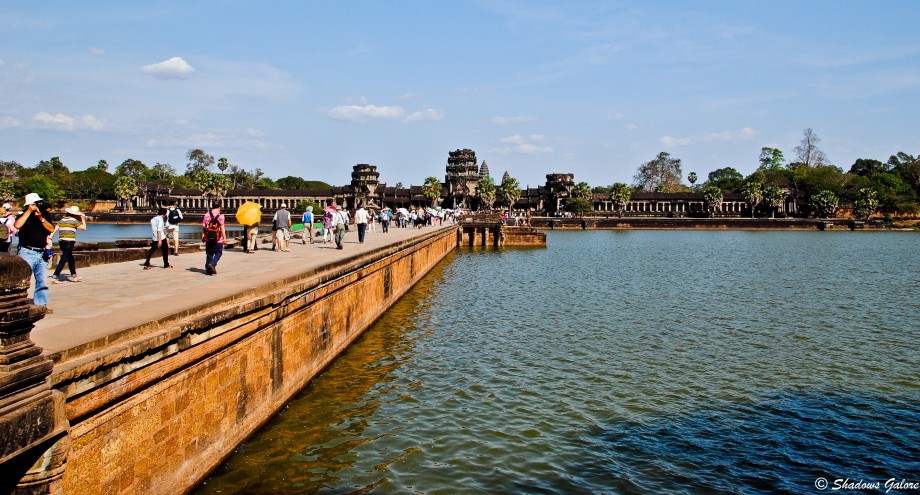 The Moat and the bridge leading to Angkor Wat

Like the Southern gate here too was a moat in front of the monument with a bridge over it guarded by the Serpent. After a fair amount of walking, we reached the main gate shaped like Mount Meru. The gate was intricately carved with beautiful Apsaras adorning the walls. Many of those who came to the monument were busy taking photographs at the gate itself. 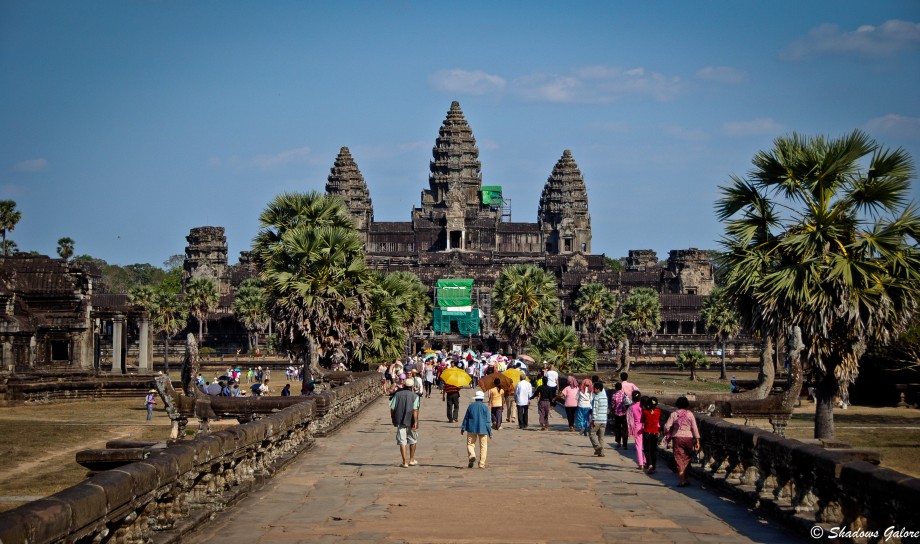 Angkor Wat as seen from the Entrance

Angkor Wat comes from Sanskrit word “Nagar” meaning City and Khmer form of the Pali word “Vatthu” which means temple, the word thus meaning Temple City.  It is the biggest temple complex in the world dedicated to Vishnu and then Buddha. It is also the best preserved the most famous among the temples of Angkor and the state symbol of Cambodia. 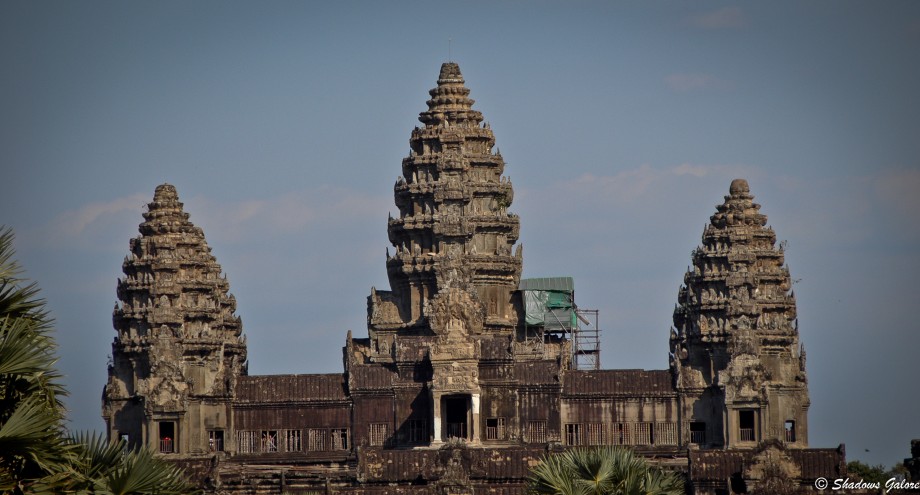 As per the traditional Khmer architecture, Angkor Wat is designed to represent Mount Meru, with a Moat around it depicting the mythical sea where the Samudra Manthan was done. The temple complex is huge with the outer wall running more than 3 km long. At the centre of the temple is a huge Quincunx of towers with the centre one being the tallest. The overall grandeur and intricacy of the sculptures of this temple complex haves amazed travelers and archeologists for centuries. 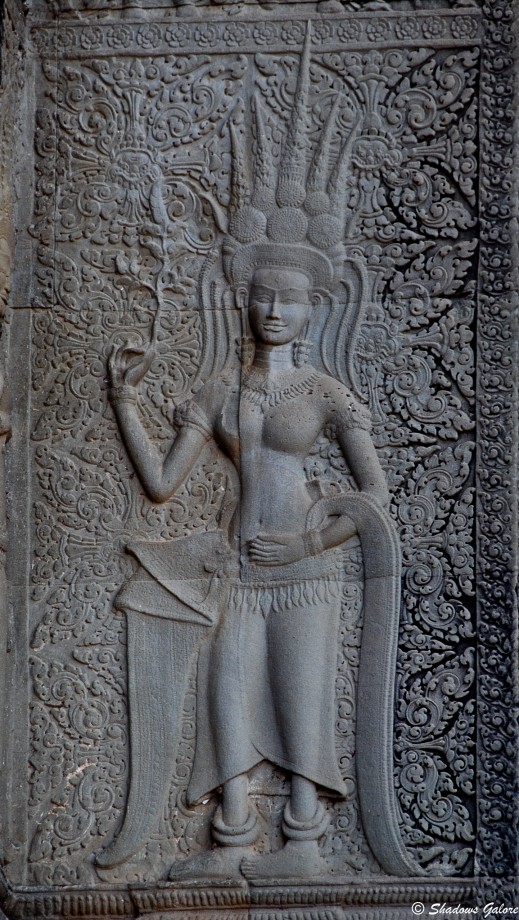 This monument was huge even by the Angkor standards. The Central Structure was enclosed inside three concentric rectangular (Oxymoron?) galleries, each inner gallery higher than the other. The walls were the abode of Devas and Apsaras carved magnificently in stone, very much different from the stone carvings I have seen back in India but reminiscent of the Ajanta Paintings. Other than the Celestials, there were scenes from the battles of Ramayana and Mahabharata, we could actually identify vast armies of monkeys annihilating the Asuras. 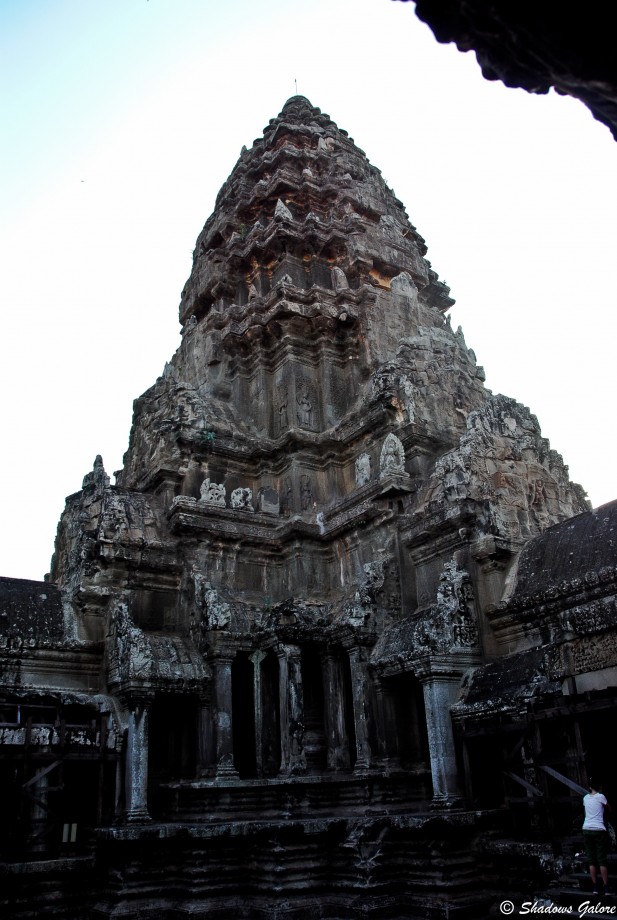 The Tower at the Upper Terrace

Once we entered inside, we were on a terrace surrounded by Gallery on all sides. In the middle of this terrace was the Upper Terrace going up to a considerable height. This was the peak of this mountain-temple. Everything was carved, from the walls to the ceiling and even the floor at some places, its difficult to imagine what a Superhuman effort it must have taken. Read somewhere that in the modern times, with all the jazzy equipment, it would have taken 300 years to build this monument! 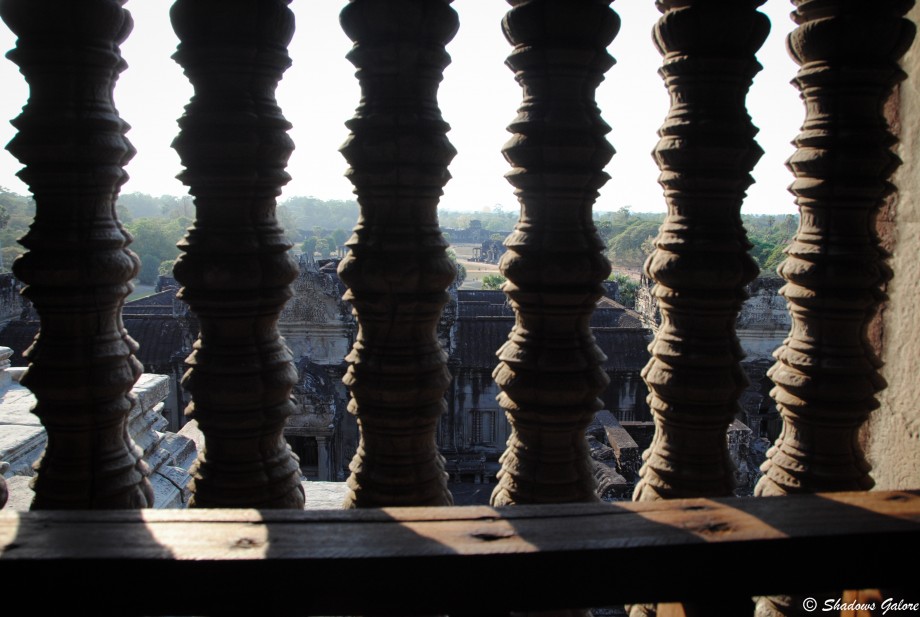 A view of Angkor Wat from the top

Finally, it was time to go up the Upper Terrace. There was a long queue for it and they were allowing very few people at a time.Climbing the wooden flight of stairs, we went up. This terrace was like a square gallery with Buddha statues and flanked by four mountain like towers on the corners. The central part was an open space. Beautifully carved again, the walls and ceiling were adorned with beautiful carvings from Hindu mythology. From the windows, we could see through the countryside into the jungles and other ruins.

Later when we came out, we went to this place from where you can get an amazing view of Angkor Wat and its reflection in a lake. Amidst the click of cameras, I could not help but get overwhelmed by how beautiful it looked. Lit golden by the setting sun, the magnificent monument shone majestically in its waters. This image will linger in my memory forever, the pinnacle of my dream of seeing Angkor Wat with my own eyes someday. One struck off the Bucket List…