Ours was the plan grande, a whirlwind trip through Malaysia, Cambodia and Thailand. The first leg of it took us to the capital of Malaysia, Kuala Lumpur. We reached Kuala Lumpur (or KL as popularly abbreviated) after a short flight from Singapore (actual flying time must have been less than 30 min). The plane landed in KL LCCT(Low Cost Terminal).The LCCT is a temporary arrangement converting a former cargo terminal and all luxury amenities have been forgone to keep costs low. So no aerobridges or elaborate physical structures and decorations to be expected here, not even sufficient seating arrangements. But come October 2012, the LCCT will be shifted to its new permanent and swankier location, KLIA 2.

Immigration was complete in a jiffy and we bought Skybus tickets (RM9 one way) to get to KL Sentral.The journey took about an hour. There are other options to travel to KL , like KLIA express,KLIA transit and KTM commuter. At KL Sentral we purchased a KTM commuter train ticket (RM 4 one way) to Batu caves.These commuter trains are fairly slow and it took about 40 min to reach there.

Batu caves is a series on caves and caverns in a Limestone hill.The place was enshrined for Lord Murugan at the start of the 20th Century. There is a huge gold coloured statue of the deity at the base of the hill and cave mouth is about 300 steep steps above. This was my second visit to this place, but the feeling after climbing the steps was the same, out of breath. Once we entered the cave mouth, we were ushured into a huge naturally covered cathedral .The view of the entrance from inside is mesmerizing. 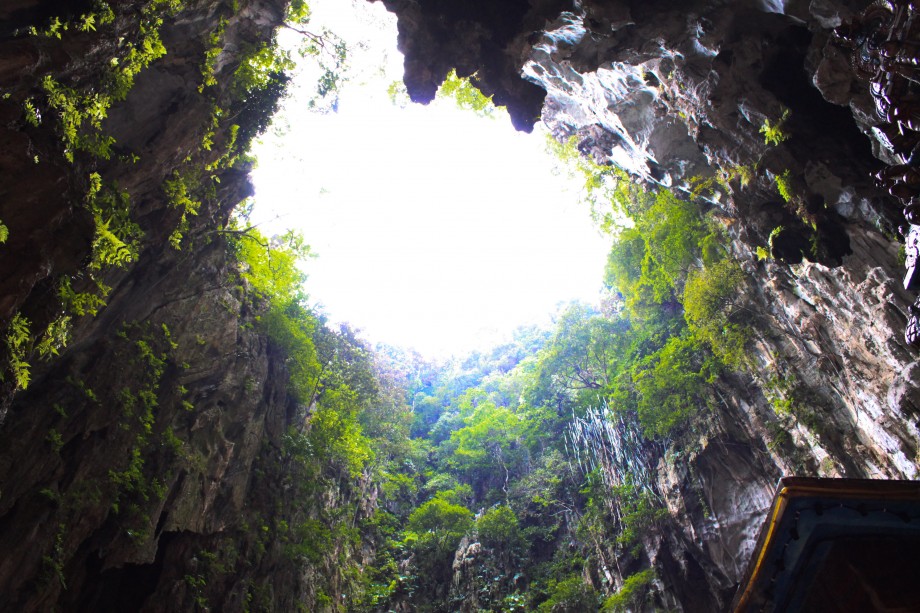 There is an open chamber adjoining the Cathedral Cave bathed in sunlight as there no rock covering the top.This houses the main temple.There are quite a few simians here and it was fun to watch the baby monkeys do antics on the rock formation.

Just a few steps below the entrance of the Cathedral Cave, there is a ‘Dark Caves’ formation. Entry here is restricted, though there are guided tours at simpulated times. It is a two-kilometer network of relatively untouched caverns. Stalactites jutting from the cave’s ceiling and stalagmites rising from the floor form intricate formations such as cave curtains, flow stones, cave pearls and scallops which took thousands of years to form.

After the climb down the stairs, we headed down to the hotels for a bite.The food available is mainly South Indian and local.You can take your pick from any of the places here based on choice. It would certainly be a crime not to try the coconut drink first.It was great and refreshing after the hike to the caves. 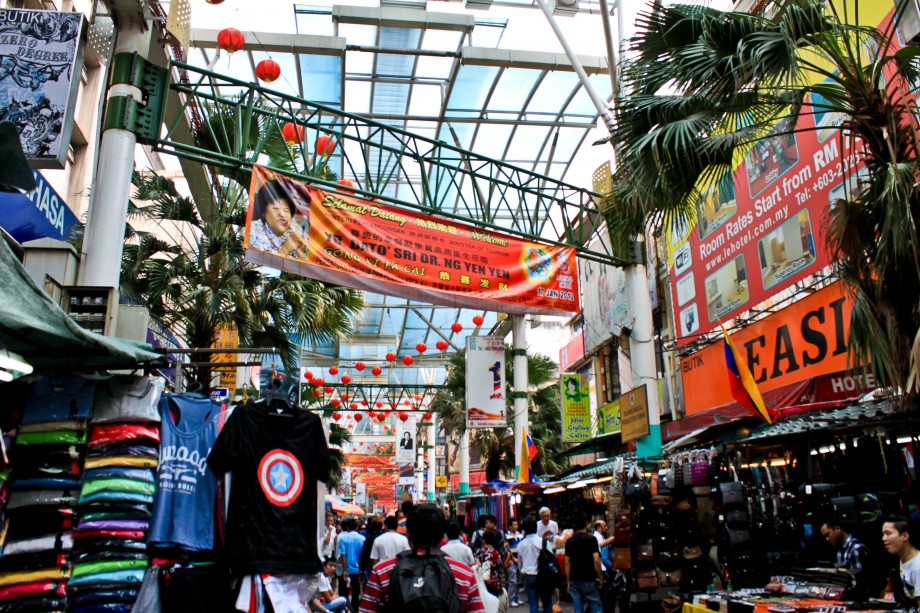 From Batu caves, we took the KTM commuter back to Kuala Kumpur station (2 RM) and got off there to head into the city. We then checked out the Central market, before heading to Flea markets at Jalan Petaling. After minor retail therapy we walked to the Gaun Di shrine to see the festivities for the Year of Dragon. There were a lot of curled decorations hanging from the ceiling here which tured out to be incense on closer check.The atmosphere was a very spiritual one. 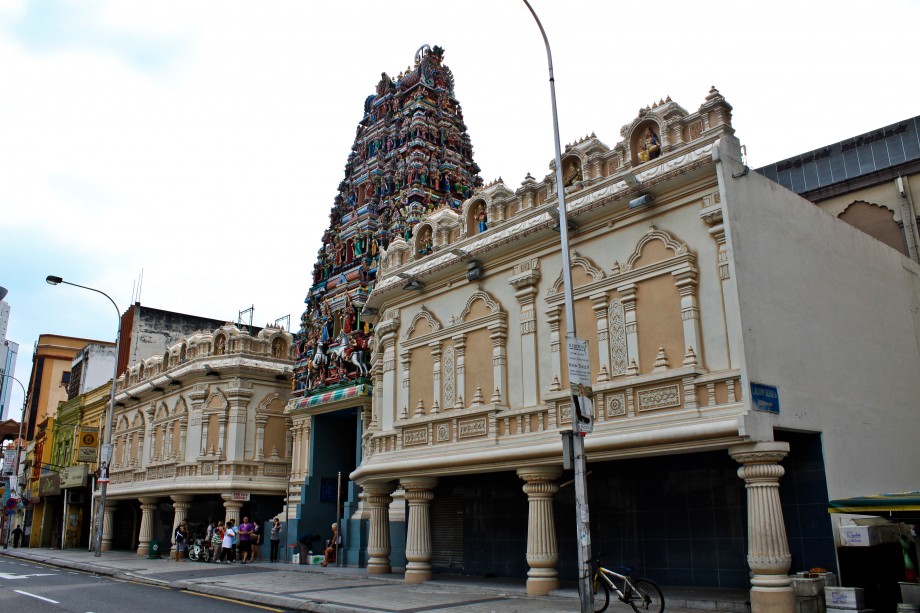 Across the street from here, there is the Sri Mahariamman temple, the oldest Hindu temple in the area. A short cab trip from Jalan Pentaling to Menara KL ensured that we escaped the sudden downpour.The cabs in KL have a written notification that they run only by meter, but its not uncommon for drivers to quote a fixed price for a distance. 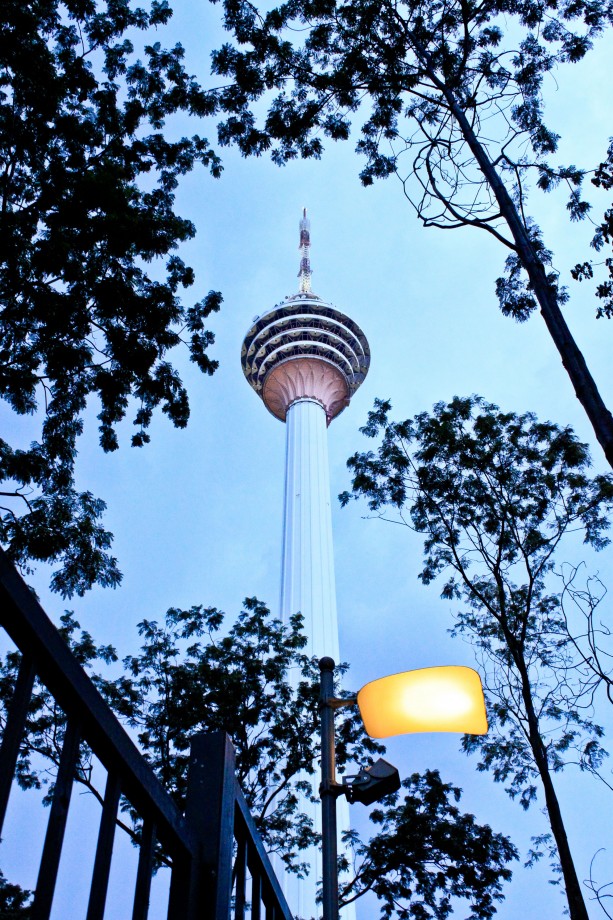 The Menara KL is a communications tower with an observation deck and revolving restaurant.The entrance is for a fee .We skipped the climb as the view of Petronas towers was at an angle and also due to the rain due to which visibility was low. 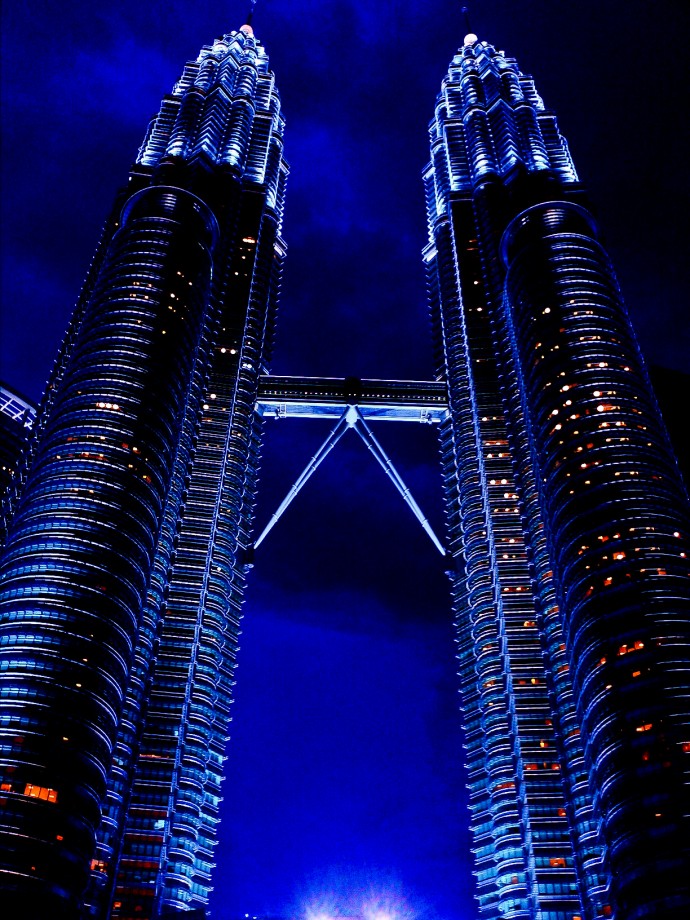 After the rain subsided, a short cab drive took us to Petronas Towers.The towers look amazing bathed in the lights and stand out as the icon of development in Malaysia. Visitors can take a ticket (RM 10) and have a look at the KL skyline from the skybridge connecting the two towers, during the day. After a quick recon of the Suria KLCC mall underneath the towers, it was time to head back to the KL Sentral for the Skybus back to LCCT. After some running about trying to find the skybus counter for ticket, we were guided to Level 1, where the ticket is given after boarding the bus.

The day was over, but the wait had just began for me.A certain friend was gonna join me when we start the second leg of journey. A trip to Angkor Wat, a place which both of us has dreamed of visiting .Angkor,Bayan,Ta Prahm, Preah Khan, Bantaey Srei……hmmmm.

I jumped up with a start, the guy beside me had fallen asleep and had stared snoring. And I was still at the LCCT.

Note: Guest post by Jayant, a great friend from TCS and now a travel companion too. All the photographs are by him. Together, we will narrate our trip of South East Asia this Winter. He will be coming with his own blog soon ~ Puru