The town of Bran and the Dracula castle 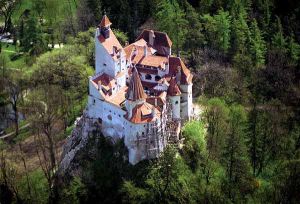 Bran, in German called Törzburg, in Hungarian Törcsvár, in old Romanian called Turciu, is a small town in Brasov county, in Romania, Europe. The name Bran is derived from Turkish, and in the Turkish language, it means “gate”, or “gateway”.

The construction of the castle was first started at the beginning of the 13th century, by the Teutonic Knights. In its first form, the castle was constructed solely of wood and was completely destroyed by the Mongol hordes in 1242. In 1377, the Hungarian king Sigismund started the building of a castle made of stone, during which period the first development of the town began.

The castle was built on a very abrupt hill and was meant to protect a strategic passing point between the then separate two countries, Valahia and Transilvania. In 1498, the castle and town came under the jurisdiction of the larger town nearby, Brasov.

Today, the once strategically important castle is a mere shadow of its former glory and is home to the Bran museum, all four of its floors being overtaken by the museum’s expositions. Clay pottery, long forgotten medieval military armoury, and medieval furniture are among some of the museum’s expos.

In the courtyard, where nobility used to come and go, a small village museum has been set up, in order to present to the museum’s visitors the village life of the medieval era in as much detail as possible.

Visiting hours are from 10 am to 6 pm, and prices are really cheap and totally free for kids. 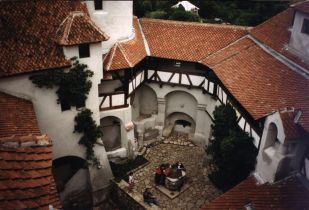 But the medieval history that is being preserved in this castle is not the only thing that is making this castle famous, this is also the castle of the legendary vampire king, Dracula, the Romanian ruler Vlad Tepes, about whom countless legends and tales have been written, and whose legends contributed in great detail even to the creation of modern-day vampire movies, such as Twilight or True Blood, to name just the two that come to mind at first glance.

Was the real person, the ruler Vlad Tepes really a vampire? Nobody knows for sure. There are some real, historical accounts, however, that speak of an extraordinarily harsh, unforgiving ruler in his person who tortured his enemies and subjects alike by hanging them on wooden sticks, stroke through their bodies from bottom to top.

However, he only became famous as Dracula, as a blood-drinking undead, after the appearance of the Irish author Bram Stoker’s 1897 novel with the same title. He was a fierce ruler, who is convinced that the country’s defenses needed discipline not only in the military but also among the common people, he inforced and enacted laws that made honesty, diligence, and hard work rewarded, while theft, laziness, lack of diligence was severely punished by physically sticking on a wooden stick, and left for dead on that (Impaled, hence his more historically accurate name, “Vlad the Impaler”).

One of the most renown historians that wrote about this ruler presents him as someone who was totally unacquainted with mercy or forgiveness, however, this ruler was also the most prominent one that brought the country back from its decadent lifestyle and outcast status to a recognised and important status. History can teach you more about the historical Dracula that lived during the Medieval era of the middle ages.

The real “Dracula”, the ruler Vlad Tepes, was captured in battle with the Hungarian king Corvin Matyas, just 25 miles from his castle, and after the castle’s defeat by the same king, Vlad was imprisoned in his own castle for two months, and then taken to Visegrad.

Present day Bran castle is a flourishing community, a constant tourist attraction and a place most western tourists want to visit.

Editor’s Note: Tezuka is a fellow traveller from Romania who has joined us as a Guest Author.Catch Tezuka on his blog HERE for the beautiful pictures from all over Romania.