Pichavaram – The magic of the Mangrove Forests 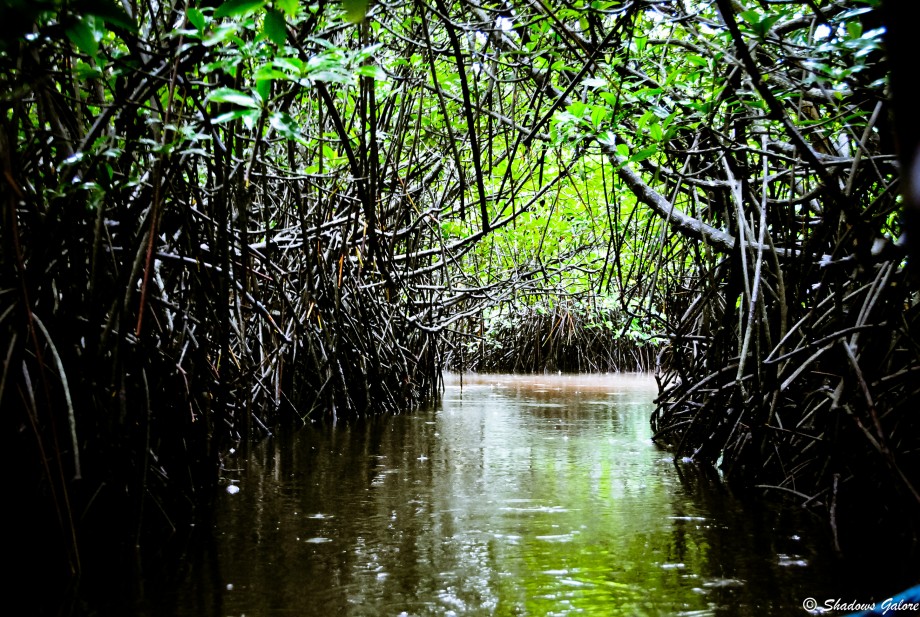 What would one do if one is home alone on Deepawali? Sit at home and watch a movie on TV? Well, this time, I chose to sit in a small boat and watch nature in its pristine beauty inside a mangrove forest.

It happened this way, it was Diwali eve and all except me had gone to their hometowns. By the stroke of good luck, I got a call from ‘in similar state’ Debdyuti asking if we shall visit someplace. So that was it! We would do what we loved best, travel and take photos. So after a few rounds of discussions, and inputs from Omkar who went there a week before, we decided on Pichavaram.

A few words about Pichavaram first. This sleepy village about 250 KM from Chennai is home to the Second Largest Mangrove forest in the world and a magnificent bird century in its own. Very rare and fast diminishing, mangrove forests are jungles of mangrove trees like Avicennia and Rhizophara which remain rooted in water. A biosphere in itself, a mangrove forest is a delicate system; and though resilient to the forces of nature, has not been able to withstand the recent onslaught of the mankind. This makes Pichavaram very special, as apart from being a shelter to migratory birds of many kinds, it’s one of the last stands made by the mangroves in the world. 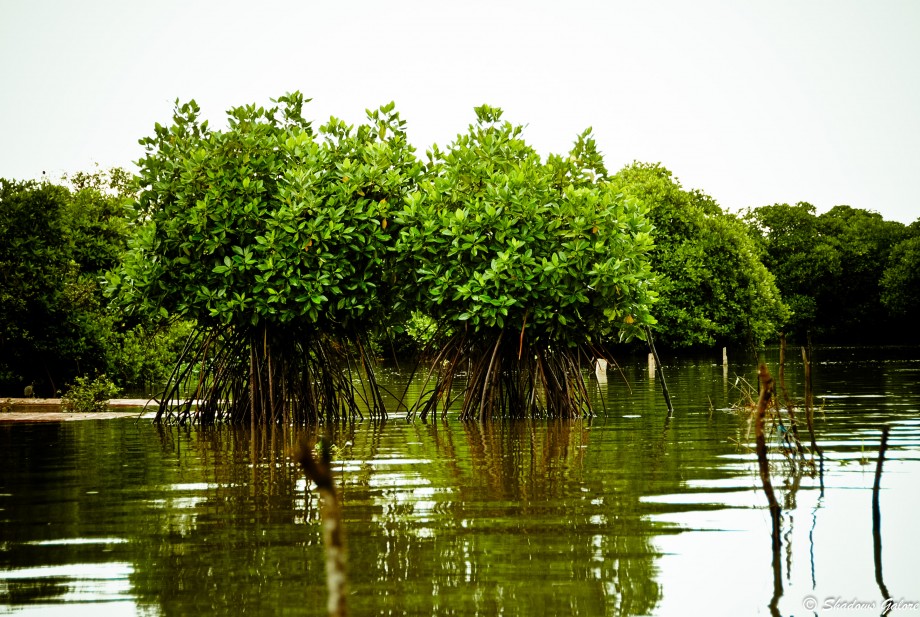 Coming back to our journey, well, it started badly. It was raining heavily and the cab which we had booked for the trip did not turn up. Fortunately we were able to book another cab at 5:00 AM and were able to start the journey one hour late. The route was our favorite ECR, where we picked up others from Great Lakes. But the driver did not have the permit to enter Pondichery so we had to divert to the Dindivanam route which was longer and quite boring. We reached Chidambaram at around 12:00 Noon and decided to give the Nataraja Temple a pass. From Chidambaram, Pichavaram is around 16 Km so we continued towards the main destination.

It was still raining when we reached the TTDC Boat Club at Pichavaram and we were apprehensive about the chances of them closing the boating. However after reaching there, we were relieved to know that the show was still on. So out came raincoats and umbrellas (I borrowed one from the boatman), we bought tickets boarded the “ship”. The rates came to Rs 340 for 4 persons for a row boat, Rs 2 for some sort of tickets and Rs 25 per still camera. 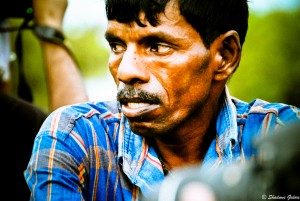 Our boatman was a diminutive middle aged man Mr. Natarajan who knew practically no English. So with whatever little Tamil I know it came on me to translate whatever he said to us (and he was a chatterbox!). Midway he stopped the boat and made us an offer we could not reuse- that he will take us into the hitherto out of bound places in the forest if we gave him Rs 100 (Rs 400 was his original quote, but his rates came down faster than the fortunes of Lehman Brother 🙂 ). Following the deal, we started. He first showed us around the lake telling us that Kamal Hassan’s Dashvataram and another movie starring Anil Kapoor and Madhuri Dixit were filmed here. He was obviously proud of the place and loved being photographed.

It was a most peculiar place, lush green mangroves everywhere and not a sight of land. Crisscrossing the jungle were narrow waterways making it the Venice of the Woods. And the peace; once you entered the forest, not a sound anywhere, not even the usual crickets and birds breaking the tranquility of the place. The Mangrove trees are not very high, about 8-10 feet in height with the roots going deep into the water. It was in such serene surroundings that we waded through slowly. 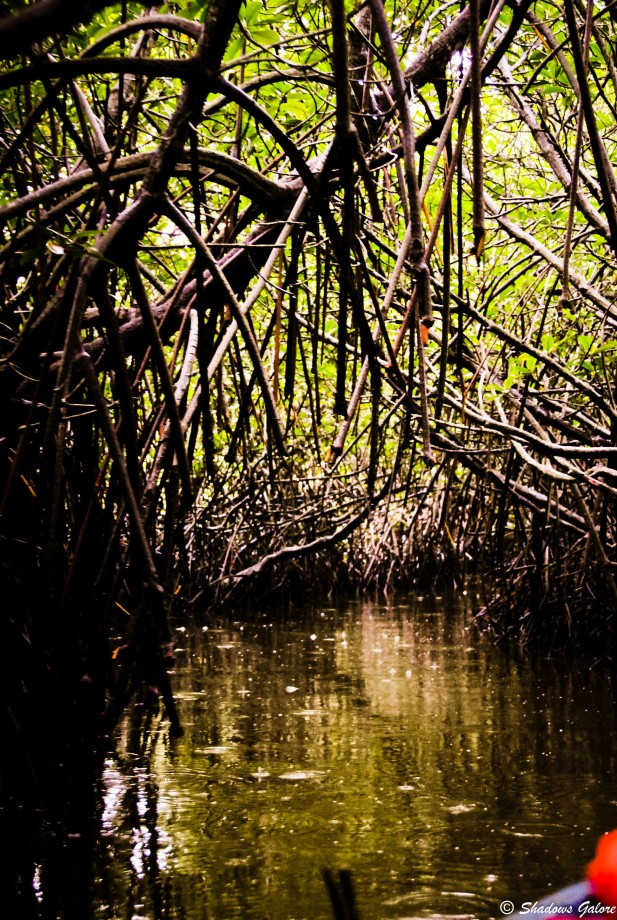 Into the Mangrove alleys

After taking along us the wider waterways, he suddenly took the boat into something what maybe be described as a mangrove-alley, a narrow path going into the forests. From here, the rains stopped coming on us, even enough sunlight could not filter through. All around us was just water and these trees, roots under us and root over our heads, protruding from the branches, making weird shapes and patters. You have to be there to get the real feeling, words or photographs shall not suffice. I don’t know why but somehow, images from all sorts of movies like Anaconda, Crocodile etc flashed through my mind. We were promptly assured that these jungles were totally harmless.

So that’s how we spent 2 hours happily floating in those jungles and clicking away to glory. Since it was raining, we were not able to spot any birds, maybe next time. After we came out of the place, the images were still lingering in our minds. But it was time to move on. So after some more photos from a nearby watch tower and lunch at the TTDC restaurant nearby, the food was bad, we started for Pondicherry. Some shopping, walking on the Promenade and clicking later, we were off for a great dinner at my favorite hotel, Du Parc. And then back, with some more hiccups related to the absence of permit and us getting caught for traffic rule violations.

This was our little trip to a little forest, the little memories of which will linger around for some time. We really were lucky to witness something which maybe not even be there for the coming generations to see- the magic of the mangrove forest. Thank you Debdyuti, Suvashree and Indraneel. A Diwali well spent !