In God’s own backwaters .. 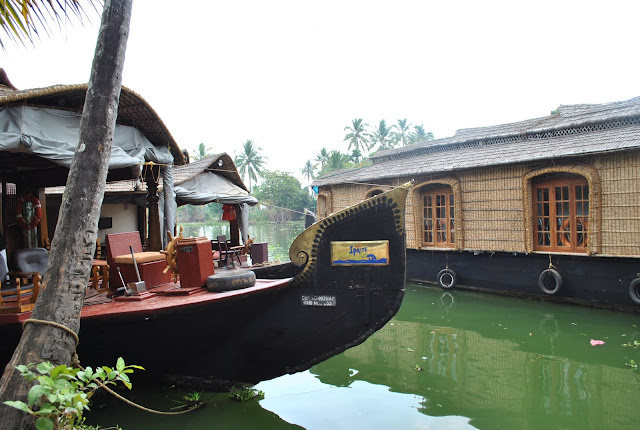 This was a totally unplanned trip, with Allepey featuring nowhere in our tour to Munnar. After spending two days in the hills, we suddenly decided that we ought to see the famed backwaters too. After some last minute adjustments, we took a bus from Munnar and started for Cochin.

Cochin was a beautiful city, alas! We reached there at nightfall. All we could do was to grab a quick dinner before the restaurants closed and bolt ourselves in the hotel we managed to find. I plan to go back someday to Cochin to see the island fort and naval base.
Anyway, early morning next day, we took the first local train for Allepey. The journey took around two hours and we were in the backwaters town by 10:00 AM. There is a restaurant just next to the railway station, they serve awesome food (had my best ever fish there!). Since the railway station is around 5 km from the town, we took an auto and asked those guys to drop us where the backwaters start. 20 minutes and we were at the final lag of our Kerala tour. 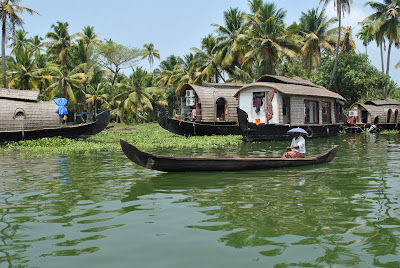 So, once there, started the haggling for prices for the houseboats. They were asking Rs 2500 per hour for a houseboat! Lesson learnt: Book your houseboat with Kerala tourism in advance! Since we were poor students, we settled for a smaller and stripped down version called Shikaara which came for Rs 600.00 per hour, booked for three hours.
So for three hours, we were on a guided tour to heaven. We saw a stadium built in the middle of water and even a youth hostel on a small island, its warden will never have to worry about boys sneaking out in the night. As we have two wheelers/ cars in our houses, there were boats ‘parked’ outsides the houses on the bank. There were even ‘boat stops’ like we have bus stops! 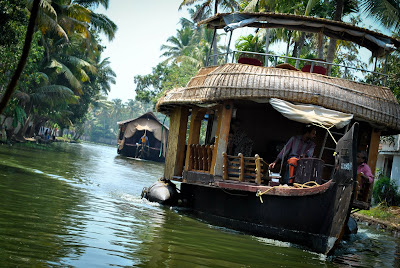 Allepey’s backwaters are world famous not for nothing! For a first timer, it’s a sight which puts one in awe. Beautiful waterways with lush greenery on both sides and countless houseboats, equally gorgeous babes made of wood! Well, words are not enough to describe how it feels to be there, look at the photos we have taken.

Complete map of our Kerala Trip